Invest in the human soul. Who knows, it might be a diamond in the rough. -  Mary McLeod Bethune

​​Commitment, Unity and Self Reliance

If we have the courage and tenacity of our forebears, who stood firmly like a rock against the lash of slavery, we shall find a way to do for our day what they did for theirs.

We are all leaders in our own right.  Members have the opportunity to lead committees and special projects that support the community we serve.

Mary McLeod Bethune was born in South Carolina on July 10, 1875 to Samuel and Patsy McIntosh McLeod who were slaves. As a young adult, she attended Dwight Moody’s Institute for Home and Foreign Missions in Chicago, with the hopes of becoming a missionary in Africa. However, she was told that she would not be able to go because black missionaries were not needed.

After her dream of becoming a missionary did not materialize, Bethune planned to teach. After a brief teaching career, Bethune used $1.50 to start the Literary and Industrial Training School for Negro Girls in Daytona. She had six students, 5 girls aged 6 to 12 and her son, Albert. These six students grew into the Bethune-Cookman College that houses over 4,000 students. From 1936 to 1942, Bethune served only part-time as president of the college as she had duties in Washington, DC. By 1942, Bethune was forced to give up the presidency of the school as it had begun to affect her health.

As a public leader, Bethune served as the Florida chapter president of the National Association of Colored Women (NACW) from 1917 to 1925 whose mission was to register as many back voters as possible. Bethune also served as the president of the Southeastern Federation of Colored Women’s Clubs from 1920 to 1925, an organization that served to amplify black women’s voices for better opportunities. She was invited to attend the Child Welfare Conference called by President Calvin Coolidge in 1928. 1930, Herbert Hoover appointed her to the White House Conference on Child Health.

In 1935, Mary McLeod Bethune founded the National Council of Negro Women in New York City. She brought together 29 different organizations to form a council to facilitate the improvement of quality of life for women and their communities. In 1938, NCNW hosted the White House Conference on Negro Women and Children significantly displaying the presence of black women in democratic roles. NCNW claimed their biggest impact came in getting black women into military officer roles in the Women’s Army Corps during World War II.

In 1936, Bethune was appointed to a position of Director of the Division of Negro Affairs, in the National Youth Administration (NYA). The NYA was a federal agency created with the support of the Works Progress Administration (WPA). Its purpose was to provide programs to promote relief and employment for young people. Bethune was responsible for releasing NYA funds to help black students through school based programs.

Mary McLeod Bethune died on May 18, 1955 at the age of 79. Her home in Daytona Beach is a National Historic Landmark. Her house in Washington, D.C. in Logan Circle is preserved as a National Historic Site by the National Park Services. A sculpture of her is located in Lincoln Park in Washington, D.C. The Bethune-Cookman University currently sits on 70 acres in Daytona Beach and has graduated over 12,900 students from almost every state in the United States and 35 countries. 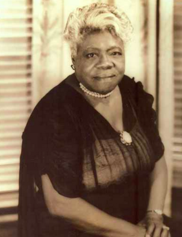