Invest in the human soul. Who knows, it might be a diamond in the rough. -  Mary McLeod Bethune

​​Commitment, Unity and Self Reliance

If we have the courage and tenacity of our forebears, who stood firmly like a rock against the lash of slavery, we shall find a way to do for our day what they did for theirs.

We are all leaders in our own right.  Members have the opportunity to lead committees and special projects that support the community we serve.

Dorothy I. Height was born on March 24, 1912 in Richmond, Virginia and grew up in Rankin, Pennsylvania. Her father, James Edward Height was a building contractor and her mother, Fannie Borroughs Height was a nurse. After having graduated from Rankin High School, Height applied and was turned down by Barnard College because they said they already had two black students. She then attended New York University earning a degree in 1932 and a master’s degree in educational psychology the following year.

In 1938, Dorothy Height was one of ten young people selected to help Eleanor Roosevelt plan a World Youth Conference. Through Eleanor Roosevelt, she met Mary McLeod Bethune who asked her to become involved in the National Council of Negro Women. Also in 1938, Height worked for YWCA where she worked for better working conditions for black domestic workers. This led to her election to the YWCA national leadership. Height served as the National President of Delta Sigma Theta Sorority from 1946 to 1957. Throughout her career Dorothy Height was honored to serve in a number of influential positions and received numerous prestigious awards. She was also known by her signature hats and her stylish dress.

Dorothy Height was the chairperson of the Executive Committee of the Leadership Conference on Civil Rights, the largest civil rights organization in the USA.

In 1957, Dorothy Height was selected as the President of the National Council of Negro Women. A position she held until 1997, where she became chair and President Emeritus. In 1986, Height founded the annual Black Family Reunion, a festival celebrated on the National Mall in Washington, DC. In 1994, President Bill Clinton presented Dorothy Height with the Medal of Freedom. She was a honored guest at the inauguration of President Barack Obama on January 20, 2009.

On April 20, 2010, Dorothy I. Height died at the age of 98. To attest to her greatness, her homegoing celebration was attended by such dignitaries as President Barack Obama and First Lady Michelle Obama, former President Bill Clinton and Secretary of State Hillary Clinton, other notable people, and many ordinary citizens. 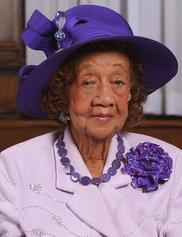